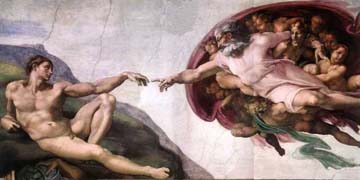 The Importance of Sulfur
by Mary Louise;Town Jaqua, Health Minister
5/6/14

And YHVH Almighty formed man of the
dust of the ground, and breathed into his
nostrils the breath of life; and man became
a living soul.- Genesis 2:7

The birth of man by the hand of the Almighty is one of the
most profound events of all time, a veritable mystery that
is being daily revealed in living flesh called, the human body.
Considering the enormous complexity of the human frame-
physically, emotionally, mentally, and spiritually- man is
indeed 'fearfully and wonderfully made' as noted by the
Psalmist David (Psalms 139:14). This being true, what is
the 'dust' of which man is made?

Referencing Genesis 2:7 in the Hebrew reveals clues
regarding man's humble beginning. 'Dust' is derived
from the Hebrew word 'aphar' (aw-fawr') which, when
expanded, refers to dry earth, powder, ashes, earth,
ground, mortar, debris, or ore. Ore is a type of rock
that contains minerals and important elements, including
metals. Allowing for this derivation, could it be that the
human body is made of elements found in the earth?
Are we the sum total of compounds called minerals?

In the vast mystery of YHVH are found minute particles
called 'atoms.' When atoms cluster together, molecules
are formed. Molecules joined together create mass and
mass begets matter. So it is that the science of life is
born and man finds his beginning in the lowly 'dust' of
the earth. However humble this dust, the basic elements
of life are found therein: the veritable building blocks of
our 'earth' that we call our body. In an effort to unravel
the marvelous mystery of life, this article will focus on
one of the top ten, most important minerals found in
the human body, namely sulfur. 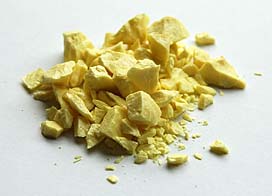 Sulfur: the overlooked mineral
On the Periodic Table of Elements, sulfur is a non-
metallic element with the symbol S and an atomic
number of 16. Pure sulfur has no smell and burns
with a blue flame, known in scripture as brimstone.
It is an essential element of life, being the eighth most
common element by mass in the human body (behind
oxygen, carbon, hydrogen, nitrogen, calcium, phosphorus
and potassium), and the third most abundant mineral in
the body (after calcium and phosphorus).

Sulfur has an important role in many biological processes,
especially metabolism. It is a versatile molecule that can
exist in several distinct oxidative states, therefore sulfur
helps the body's performance and overall wellbeing.
Sulfur is also known as the healing mineral and the
beauty mineral, since it is responsible for healthy skin,
complexion, hair, and nails. The curliness of hair is said
to be directly related to the amount of sulfur-to-sulfur
bonds in the body.

Sulfur: its function
Sulfur is stored in every cell of the body, with higher
concentrations in the joints, skin, hair, and nails. Allowing
for its widespread presence, it is not surprising that
sulfur has an integral role in

Sulfur: its many benefits

Sulfur-deficiencies are largely the result of poor diet
and lifestyle choices, factors that prove to be the
underlying cause of most health problems in the US.
Since the Standard American Diet consists of cooked,
processed, and animal-based foods, it is, by virtue of
its exposure to heat, devoid of sulfur. Likewise, the US
food supply is largely sulfur-deficient because it is
grown in sulfur-depleted soils and in greenhouses or
with irrigations systems that do not utilize sulfur-rich
rain water. Given these factors, it is not surprising that
our nation's food supply is woefully sulfur-poor and the
average American woefully sick. Compromising the
nutritional quality of our nation's food supply, and
conversely, public health has caused America to be
a nation at risk. This fact is further compounded in
that most medical professionals are not skilled to
detect nutritional deficiencies which often leads to
misdiagnosis. For example, many times symtpoms
that are labeled as a 'protein deficiency' are more
accurately signs of a sulfur deficiency.

Sulfur: healthy sources
Sulfur is found readily in nature, but identifying the
sources requires research and personal discovery.
Nevertheless, common sources are both accessible
and obtainable as pointed out below.

1. Volcanic rock
The ultimate source of sulfur is found in volcanic
rock, mainly basalt, that is spewed up from the earth’s
core during volcanic eruptions. Locations with
significant volcanic activity such as Iceland, Oregon,
and Hawaii are known to have greater sulfur concentrations
in the water and soil, a factor that results in lower rates
of sulfur deficiency-related health problems such as heart
disease, diabetes, and obesity.

2. MSM
All living organisms contain an organic form of sulfur
known as methyl-sulfonyl-methane (MSM), a powerful
antioxidant that is a byproduct of algae that grows in the
oceans and then evaporates into clouds. As clouds
precipitate, MSM falls to the earth and becomes food
for all life forms. High concentrations of MSM are in all
plant life that is watered by rain. Thus foods grown in
greenhouses and with irrigation are MSM deficient.
Pine trees (bark, needles, nuts), aloe vera, wild grasses,
and fresh tobacco leaves contain some of the richest
amounts of MSM on earth. Since MSM in all plants
quickly evaporates after harvest and is destroyed by
heat, living foods should be eaten as close to harvest
as possible and never cooked.

3. Food
Fulfiling the body's need for sulfur can be easily
accomplished by eating sulfur-rich foods. Some
of these foods include:

Due to their natural, heat-generating property, sulfur-rich
foods should be eaten in concert with salty vegetables
such as celery, kale, chard, spinach, and sea vegetables.
The addition of avocado, seeds, oils, and/or nuts further
counter-balances the pungent, spicyness of sulfur-rich
foods, making them more digestible, assimilable, and
therefore beneficial to the body. Since sulfur is directly
involved in the formation of bile acids, it is important
to not only consume sulfurous foods but also combine
them properly.

4. Water
It is estimated that about ten percent of the body's
need for sulfur is derived from drinking water. The
most suflur-rich water is derived in areas of volcanic
activity and sulfur-rich springs. In addition, studies
find that hard water is more likely to contain sulfur
and therefore healthier, whereas soft water is shown
to increase the risk of heart disease, cancer, and
obesity.

5. Sulfur Springs
The therapeutic benefits of hot springs have been
well known for centuries. Soaking in hot, sulfur-rich
waters can eliminate or ameliorate sulfur deficiencies,
because the body will absorb this much-needed
mineral through the pores of the skin. Hot sulfur
springs can thus relieve sulfur-related deficiencies
that cause pain, poor circulation, high blood pressure,
stress, anxiety, insomnia, and more.

Sulfur: Supplementation
Thanks to modern technology, naturally-occurring
sulfur has been isolated and made available as a
crystal powder, known as MSM. This powder has
become a popular way to obtain sulfur on a daily
basis. It should be taken in small quantities and
increased according to the body's tolerance.
Initial recommended dose is 1/4- 1/2 Tbsp twice
a day, mixed in (unheated) water and chased with
juice since it has a rugged taste. Sulfur supplements
are also available in liquid form. Trusted sources
are listed at the end of this article.

In conclusion
Sadly, sulfur has been consistently overlooked by
government agencies such as the FDA and the USDA
in addressing issues of nutritional deficiencies. Allowing
for the importance of this mineral, it has been over
twenty years since the U.S. Food and Nutrition Board
(FNB) issued its last update on recommended daily
allowances (RDA) for sulfur. Likewise the National
Academy of Sciences has yet to assign a minimum
daily requirement (MDR) for sulfur. That the nutritional
status of sulfur has thus been largely ignored, overlooked,
and/or underestimated by purported watchguards of
public health is fact and has cost the average American
untold health-related suffering and financial hardship.

Scientific, medical, and biblical research proves that
most health problems are the result of poor nutrition,
i.e. poor diet. Proper nutrition is not found in cooked,
processed, animal-based foods, rendering the
Standard American Diet a dismal failure in properly
nourishing the body. Proper nutrition is found in natural,
whole foods: fruit, vegetables, seeds, nuts, and whole
grains in their raw, living state. Given these foods, the
body is shown to heal itself, correcting imbalances
and/or deficiencies of all kinds.

Resolving sulfur deficiency is usually a simple
process that only requires personal research and
responsibility. Though correcting imbalances in
the body can present challenges, doing so is
worth the effort. Living without the encumbrances
of sickness, pain, and disease that are associated
with nutritional deficiencies takes commitment and
discipline. Nevertheless, a superior quality of health
is not only possible but promised by YHVH our
Creator to those who believe in Him and adhere to
His ways. Let us not disappoint the Almighty nor
ourselves by accepting a lesser quality of life. Let
us embrace His promises by following His instructions,
so that we may truly live!

And YHVH said, Behold, I have given you
every herb bearing seed, which is upon
the face of all the earth, and every tree,
in the which is the fruit of a tree yielding
seed; to you it shall be for meat.
Genesis 1:29

I call heaven and earth to witness against
you this day, that I have set before you life
and death, the blessing and the curse:
therefore choose life, that you may live,
you and your seed; Deuteronomy 30:19

Beloved, I pray that in all things you may
prosper and be in health, even as your
soul prospers. 3 John 1:2

Eating for Beauty- by David Wolfe
Foods that Heal- by Dr. Bernard Jensen
Green for Life- by Victoria Boutenko

Back to LIVING Letter #70/index